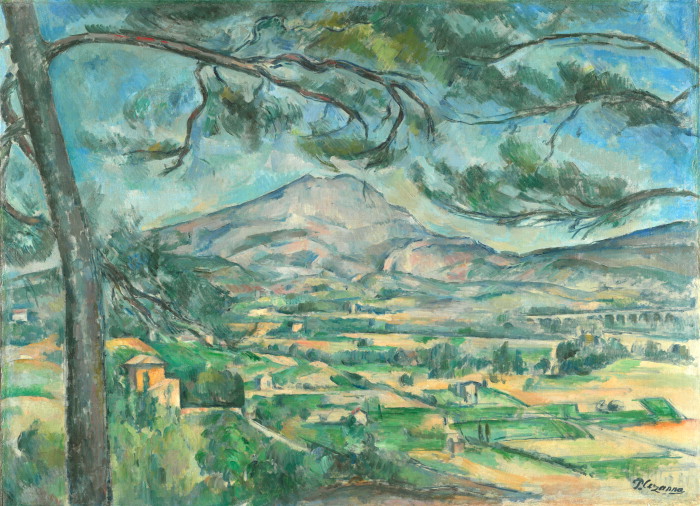 In the catalogue for the 1910 London exhibition Manet and the Post-Impressionists, the art critic and curator Roger Fry wrote that Cézanne ‘showed how it was possible to pass from the complexity of the appearance of things to the geometrical simplicity which design demands’. So whilst Cézanne focused mainly on the landscape around his home town, he turns this landscape into a study of form and colour. Whereas the Impressionists painted with thick, short brushstrokes, shimmering colours and no outlines, Cézanne used blocks of strong colour, prominently outlining forms such as the tree trunk and the fields in dark blue.  His interest in form and line is emphasised in the shape of the branches and the way in which they perfectly echo the outline of the mountain behind. Cézanne’s simplification of the landscape could be interpreted as a return to an era of balanced, harmonious form rather than complex ornamentation, as well as a leap towards Modernism: the structured parallel brushstrokes that fragment the surface of the composition, as well as the bold colours, appealed to younger artists and paved the way towards abstraction.

Paul Cézanne (1839-1906) was the son of a rich banker and landowner in Aix-en-Provence, in the south of France. Cézanne’s father originally hoped that his son would pursue a legal career, but eventually agreed to support him financially as an artist. In 1861, Cézanne travelled to Paris on the advice of his schoolmate, the writer Émile Zola, and exhibited for some years with Impressionist artists such as Camille Pissarro. However, he ultimately preferred to work in his native Aix and spent much of his career back at the family farm, the Jas de Bouffan, where his father gave him a studio space. Cézanne learnt much from Impressionism but whilst many of his contemporaries were focusing on city life, Cézanne chose to depict the landscapes and peasant inhabitants around his home town.

Mount Sainte-Victoire stands to the east of Aix-en-Provence, dominating views of the surrounding landscape. The mountain already held a symbolic appeal for the region. It was associated with an ancient Roman victory and with early Christian festivals. In Cézanne’s time, a cross was erected at its peak to celebrate the fact that Provence had been spared from invasion during the Franco-Prussian war (1870-71). However whilst Cézanne’s rendering of the mountain makes it monumental, he deliberately prevents us from seeing this as a timeless classical landscape: there is a modern railway viaduct to the right hand side of the composition, and the small blocky houses represent local farmhouses rather than great classical architecture. This painting was first exhibited at a local salon of amateur artists in Aix-en-Provence in 1895. This may be surprising, given that Cézanne had achieved success in Paris and exhibited in more official spaces before this: for the local population however, Cézanne’s modern approach was incomprehensible.

In a 1904 letter to his painter-friend Émile Bernard, Cézanne famously claimed that nature should be treated in terms of three-dimensional geometric shapes. Cézanne saw the purpose and effect of every aspect of his composition: horizontal lines created breadth and vertical ones suggested depth. Whereas Renaissance painters had carefully concealed their under-drawing, leaving a highly finished surface that seemed to suggest that the painting was not in fact a canvas at all, but reality itself, Cézanne leaves many areas of his canvas roughly painted, with his sketchy outlines showing through: look in particular at the fields in the foreground. Concerning colour, Cézanne wrote that blue created atmosphere, whilst yellows and reds reflected the play of light; he uses those colours here to suggest the warm, sunny climate of the southern regions of France. Cézanne’s painting is as much about paint and canvas as it is about subject matter.

Unusually for his post-1880 works, Cézanne has signed this painting on the front of the canvas, at the bottom right. The colour he uses stands out from the field behind, but matches the tones of the tree trunk and outlines.

Joachim Gasquet, a young poet and son of one of Cézanne’s childhood friends, saw this painting when it was exhibited in 1895 and admired it. Cézanne, flattered by Gasquet’s praise, gave him the painting, The two men remained good friends, with Cézanne painting Gasquet’s portrait in 1896 (the picture is now in the National Gallery of Prague) and Gasquet writing a book about the artist in 1921. Gasquet sold this painting after Cézanne’s death for the extremely high price of 12,000 French francs.