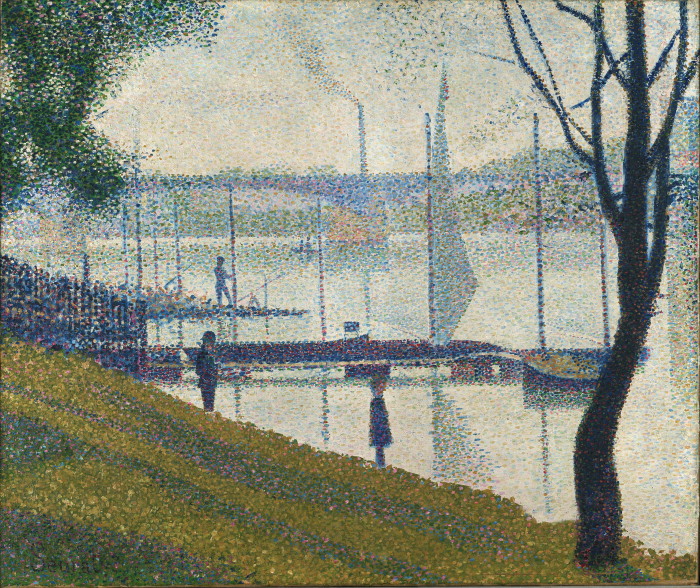 Like Monet in his Autumn Effect at Argenteuil (1873), Seurat chose a site west of Paris along the Seine.

He painted looking along the river from the Île de la Grande Jatte, a popular Sunday afternoon destination that is the subject of a large-scale painting now at the Art Institute of Chicago.

While the latter’s warm tonalities evokes a leisurely summer day, the atmosphere here is very different, with the watery colours and the solitary figures clad in heavy overcoats suggestive of a grey winter day.

Whereas Monet leaves the background of Autumn Effect ambiguous, here the smoking chimney-stack beyond the bridge is overt, and its vertical form echoes other vertical elements such as the tall masts, the bridge supports, the tree in the foreground and the figures themselves.

This is a still and quiet painting, which seems not to celebrate the activity of modern life, but rather to accept its everyday presence.

Georges Seurat (1859-91) was born in Paris to wealthy parents, and he trained conventionally at the École des Beaux-Arts, exhibiting some early work at the official Salon exhibitions.

His most famous painting however, the monumental Bathers at Asnières (1883) that hangs in the National Gallery, was rejected by the Salon. The Courtauld holds several small preparatory oil sketches for this painting.

The rejection by the official artistic establishment led Seurat and other like-minded artists to set up the Society of Independent Artists in 1884. It was through this group that Seurat met Paul Signac (1863-1935) with whom he would develop the technique of pointillisme.

The technique used here by Seurat became known as pointillisme, ‘point’ being the French word for ‘dot’, and the painting being ostensibly made up of tiny dots of colour.

The technique was based on recent scientific colour theories, notably those of Ogden Rood in his book Modern Chromatics (1879). They demonstrated that dots of complementary colours placed next to each other were intended to blend ‘on the retina’ of the viewer, presenting a more natural and vibrant way of seeing colour.

For example, the red and blue dots of the boats blend to make up a deep purple, which defines a dark shadow against the shimmering colours of the water.

In reality, the dots are not small enough for this theory to operate fully, and the brushstrokes are in fact quite varied, from broader areas of light green to tiny dots of blue and yellow placed on top to create shadows and highlights.

Both Seurat and his contemporary Paul Signac experimented with the technique, sometimes using it for more ‘artificial’ subjects such as theatre and circus performances, such as Le Chahut (1889-90, Kröller-Müller Museum, Otterlo), a study for which hangs in The Courtauld Gallery.

For The Bridge at Courbevoie, Seurat used a standard canvas size (a ‘no.10 portrait’), and unusually this canvas is not primed.

Whist this is suggestive of a rapidly executed painting, the technique of pointillisme was painstaking and only a small number of pictures were completed in this style.

Preparatory studies exist even for this relatively small canvas, and x-rays demonstrate the care with which Seurat completed the composition.

The shadows cast by the trees across the grass are painted diligently in a mix of blues and pinks so that they appear mauve, and this adds texture to the riverbank.

Whilst the coloured dots do not blend in quite the way that Seurat might have intended, they cause the eye to flit rapidly across the composition, preventing the painting from appearing stiff or dull.

Seurat’s signature, included at the bottom left, is carefully painted, also in small dots, and in colours that will allow it to stand out just enough from the grass behind it.

Seurat preferred the term ‘chromoluminarism’ to pointillisme, because it suggested effects of colour and light, but it did not catch on.

Whilst compositions such as this would have been completed in the studio, Seurat undertook preparatory sketches outdoors, using a specially-made box that contained small wooden painting panels of a standard size that slid into grooves so that they could be stored and transported.

Courbevoie later became a venue for regular meetings of Cubist artists, including Fernand Léger, Jean Metzinger and Marcel Duchamp and his brothers, at the home of Albert Gleizes. In many respects, Seurat’s scientific approach to colour pre-empts the fragmentary shimmering surfaces of many Cubist paintings.

The Bridge at Courbevoie | Georges Seurat