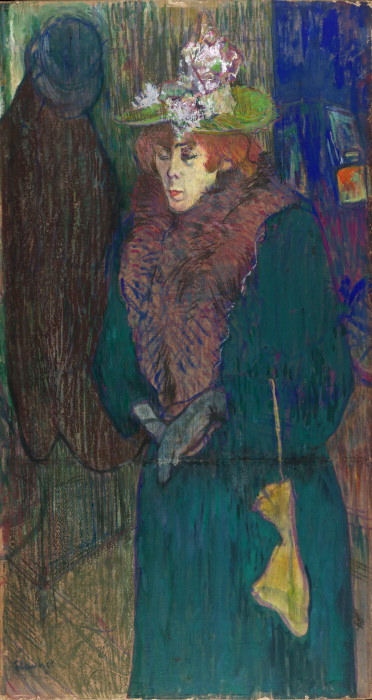 Lautrec met Jane Avril in the early 1890s, when he was commissioned to design posters for the Moulin Rouge where Avril was a dancer.

Whereas Lautrec’s posters were intended to promote the star of the show, this painting seems to be more intimate, the result of a close friendship.

Jane Avril is represented either leaving or arriving at the Moulin Rouge. She has traded the glamorous stage costumes for a thick coat that appears to engulf her. She seems vulnerable and gaunt, lost in her own thoughts.

Jane Avril was probably only in her mid-twenties when this work was painted, although she seems older. The shadowy presence of the man’s overcoat and hat hanging in the entrance recalls male admirers, but ironically it also evokes a sense of domestic permanence that Avril never experienced.

Unlike the paintings of the Parisian demi-monde undertaken by Manet, Degas and others, Lautrec portrays Avril on an equal footing, and this is a sensitive and sympathetic image of her.

Henri de Toulouse-Lautrec (1864-1901) was a member of one of France’s oldest noble families based in Albi, in southwestern France.

When Lautrec was just three, his parents separated, and at the age of eight he went to live with his mother in Paris.

Lautrec suffered from a number of congenital health problems, and in his teens fractured both his legs. The breaks did not heal properly, perhaps due to a bone condition akin to osteoporosis, and his legs ceased to grow. As a result, he was only 5ft 1in (1.54 metres) tall.

Lautrec joined the Bohemian circles of Montmartre and always identified with those on the margins of society, including the Moulin Rouge dancer Jane Avril. He became famous for his depictions of the music hall world, in both oil paintings and lithographic posters.

Jane Avril joined the Moulin Rouge as a dancer shortly after it opened in 1889, the same year as the Paris World’s Fair for which the Eiffel Tower was built. Until then, Avril (whose real name was Jeanne Beaudon) had been working as a cashier at the World’s Fair.

She quickly became the star performer at the Moulin Rouge, an exotic dance hall constructed around a garden that contained a model elephant large enough to host belly-dancing performances.

It was a place of escape and fiction for dancers and audiences alike, and it allowed Jane Avril to inhabit a life distinct from her abusive past. She developed an energetic style of her own and her dancing differed from the acts of more flirtatious or overtly sexual stars such as La Goulue (Louise Weber).

On the stage, Jane Avril became known as La Mélinite, after a form of explosive. Lautrec suggests here that life off stage was quite different.

In combining oil and pastel, Lautrec associates very distinct types of materials, ones that were seldom used in the same work. This is typical of his experimental approach to painting and his willingness to cross established boundaries.

Areas of the board support are left bare. The strong vertical lines and long thin format of the composition draw all of the elements inwards, focusing the viewer’s attention on the figure of Avril.

A horizontal line across the board indicates that two pieces of paper have been joined together to arrive at the correct format for the composition (a third thin strip has been attached at the top left, although the join is concealed by the frame).

The painting may have hung in the Moulin Rouge, in the passage that led to the stage.

Jane Avril had been abused as a child by her courtesan mother and, perhaps because of this, she developed a nervous disorder known as chorea, or ‘St Vitus’ Dance’, for which she went to be treated at the Salpêtrière hospital in Paris. It was during the annual Bal des folles (Ball of the Madwomen) held by the hospital for its female inmates that Jane Avril discovered her love of dancing which, she claimed, cured her of her condition.

Lautrec travelled to London on many occasions and designed a number of English posters. It was in London that he met Oscar Wilde, becoming a vocal supporter of him when he was on trial for gross indecency. Like Lautrec and Avril themselves, Wilde represented a section of society considered marginal; a plight with which Lautrec could sympathise.